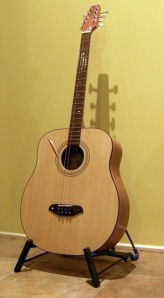 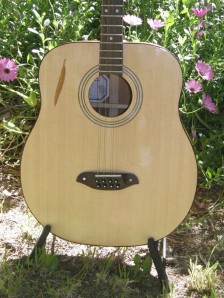 The Parlour 8 string has 4 courses of 2, tuned to DGBE, which makes it play like a baritone ukulele  or a 12 string without the bass E and A strings. The design idea was to build an instrument for guitar players that sounded refreshingly different, but did not demand any transposing or relearning scale positions.

The Parlour 8 was designed mainly for playing lead over the top of an acoustic band. In the treble range it takes on a mandolin-like ring and has a 15 fret neck to make it easier to play in the super octave range. In the lower range it takes on more of a 12 string sound for playing rhythm, though with a much lighter effect. There are two voices in the one instrument.

The Parlour 8 can be ordered with a 14 or 15 fret neck, and in left or right hand orientation.

A happy 8-string player at the 2012 National Folk Festival, Canberra: